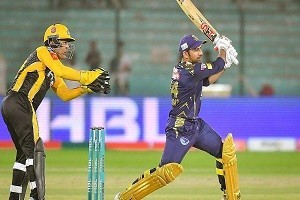 Both teams have played seven matches each so far and both got equal victories by winning three matches out of their seven. Quetta Gladiators team standing at no 4 position in the points table and Peshawar Zalmi at no 5. So the race to the next round for both teams becomes difficult because it’s a must-win match for both. The Karachi Kings team lost seven matches so they are out of the tournament. From Zalmi and Gladiators, one of them will qualify for the next round.

Ahsan Ali is the top runs scorer from his team scoring 249 runs in seven innings. JJ Roy played just three matches and smoked 170 runs with his highest 116. WCF Smeed also played really well in his three innings of a total of 130.
From the Zalmi side, Shoaib Malik is their leading runs scorer with 218 runs. BCJ Cutting 161 and SE Rutherford 144. Salman Irshad is the best bowler they have got so far, who took seven wickets in five matches. Usman Qadir took four and Mohammad Umar 4. From the QG team, Naseem Shah took seven wickets in seven matches, Mohammad Nawaz 6, and JP Faulkner also took six wickets.

Peshawar Zalmi won the toss and elected to bat first.