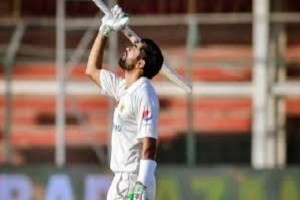 The final day of the second test match between Pakistan and Australia will end today. Ozzie’s team batted first and scored 556 runs in their first innings with nine wickets down. In reply, the Pakistani team failed to post good first innings total and all out with 148 runs on the board. The Australian team batted again instead to do the follow-on and scored 97/2d in their second innings. A total of 506 runs total was required to win this test match for the Pakistan team.

Babar Azam: “The plan was always to try and survive the overs, and even towards the end there were no serious discussions about chasing it. Pay tribute to Shafique and Rizwan. We are looking forward to going one better in Lahore.”

Pat Cummins: [Asked if five and a half sessions to bowl Pakistan out was enough time] “Yeah I think so. You saw it was still a pretty good wicket even on day four or five. I thought they batted fantastically. I think we created enough chances, probably just didn’t grab the couple half chances that were presented to us. But a great five days of Test cricket. I thought Mitch Swepson was fantastic on debut. His figures absolutely don’t do him justice. In that middle session, I felt like he could have had three or four wickets going into the tea break.

I thought he was fantastic. Nate bowled beautifully as well, as he always does on day fives chasing a win. I’m just really proud of the efforts. For an Aussie team to bat over two days at the start of a Test match, I don’t think we’ve done that for a long time. So lots of great positives, nil-all in the series, lots to play for next week. The way we batted was fantastic. The way we really hunted those wickets on day three, the ball started reversing, I thought that was absolutely brilliant as well. So heaps positives this week. I felt we were ahead of the game the whole time and that’s not always the case in foreign conditions. So really proud of the boys.”

is named Player of the Match for producing the seventh highest fourth innings total of all time in Test cricket with his 196.

In the second innings, Pakistan batted beautifully. The opener of the team Abdullah Shafique failed to complete his century, but he scored 96 runs off the 305 deliveries he faced. He smashed just six boundaries and a maximum in his 465 minutes long innings. Imam-ul-Haq had not survived for so long and out with a single. Azhar Ali also failed to prove himself once again. Fawad Alam’s wicket fell when was at 6…