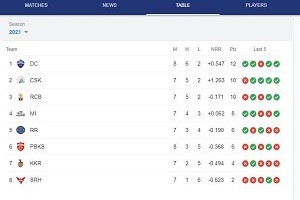 Here you can watch the latest updated points table of the Tata IPL season 15 2022. We will try to update this points table right after the end of every match.

Standings are updated with the completion of each game

The 2022 IPL will give its 10 teams seedings and place them in two “virtual” groups during the league phase of the tournament.

The seedings are based on the number of times a team has won the IPL or made the finals.

At the conclusion of the league stage, the top 4 teams will qualify for the playoffs.