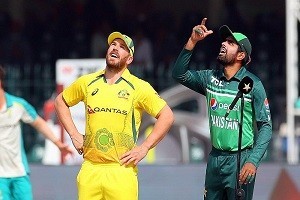 From the home team Pakistan, Imam-ul-Haq is the top runs scorer so far, with his two centuries in two matches. TM Head’s batting performance also is magnificent with 190 runs in two innings. The captain of the Pakistan team Babar Azam showed his real class of batting in the last ODI scoring 114 runs off just 83 deliveries. The Pakistan team chased down the 350 runs target in 49 overs with six-wicket remaining. It was the highest ODI chase in the history of Pakistan cricket.

The pitches are absolutely batting-friendly but for the seamers, there is a little early swing is available. but A Zampa is giving a shocking performance, he took six wickets in the first two ODI’s. Shaheen Shah Afridi was not available in the first ODI, but in the second match, he dismissed four Australian batsmen wickets. Zahid Mahmood gave 130 runs in 20 overs with taking three wickets.

So far no team is the favorite because both teams have given their hundred percent in the first two matches. Now there is a little hint, the most important thing is that line and length for both team’s bowlers can be the key to victory here. Which team’s bowlers will control their nerves, that team will have more chances of victory here.

Imam-Ul-Haq after his unbeaten 89*:

“The way the boys came back from the first match, it just comes into the self-belief and the trust we have in each other. We talked a lot and said we really need to step up. You can’t perform in every game but hats off to the boys for the way they stepped up. I’m a mature player now and working hard for the last one and a half years and want to thank almighty Allah. The way things are changing for me, I really want to thank Babar. He’s my best friend and we really help each other, and my coaches, I really want to thank everyone.

Fakhar got out early, but we knew we were in good form me, and Babar. We just wanted to stay in the crease and we knew if we did, the runs will come. It was not a high amount of runs, it was just 211, so we wanted to just stay calm, have good shape, good intent, punish the loose balls and we were lucky today. [On his critics] I respect everyone and I really thank almighty Allah [when] they criticize me. The thing which I have changed in myself is that I just can control what is in my control and that is my cricket. I really want to focus on that. If you play in a match for Pakistan against any team, you will be criticized.”

Babar Azam is unsurprisingly named Player of the Match.

“We didn’t get enough runs. When you go three down in the first few overs, it’s always going to be hard to get a total. But I thought our guys fought really hard. With the ball in hand, we tried a lot of different things but two class guys put on a clinic tonight. We just wanted to keep being attacking and aggressive through the whole [first] innings. We knew that if we got 200, you’re probably never going to win the game unless everything goes perfectly for you with the ball.

So you’re still trying to get above 260-270 and sometimes you risk losing some wickets and making that 200 instead of just going to 220 or 230 anyway. Travis and Ben played really well throughout the series. I think with the ball, Nathan Ellis, Sean Abbott, Cameron Green, and Adam Zampa bowled excellent throughout all three games. I thought there were a lot more positives than negatives. It was just that, we were on the receiving end of a couple of great knocks from Babar and Imam. It’s been amazing to play here in Pakistan in front of some great fans. They’ve been supportive of great cricket regardless of whether it’s Australia playing well or Pakistan. So we’re very thankful for that.”

The Player of the Series award, including the new car goes to… drumroll, please… Babar Azam. Babar’s 276 runs in this series are the fourth most in a three-run ODI series by a Pakistan batter. Imam’s 298 runs are third. They’re both behind… Babar Azam’s 360 runs against West Indies in 2016-17.