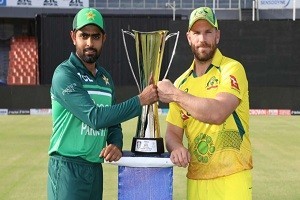 From June 1975 to 2019 a total of 104 one-day internationals has been played between Pakistan and Australia team. Pakistan got 32 victories and Australia won 68 of them. From January 2017 to 2019, nine one-day international matches were played between these two teams and Pakistan lost all of them. So the ODI performance of the Pakistan cricket team is not good against the Ozzies. That means the visitor team Australia will be a lot of confidence, especially after winning the three-test series against Pakistan by 1-0. The opening partnership will be the key for Pakistan.

“The boys played really well. The opening batsmen set the tone early for us to put up a really competitive total. To be fair, we thought it was going to be a really tough chase for us to defend with the dew coming in. But our quick bowlers built some really good pressure at the start so we got results at the end. [About Daniel Vettori’s advice] It’s all just tactical stuff.

We do a bit of research on the opposition and then hash over the plans before we go out so try to keep it pretty simple. I think it stayed quite low and was skidding through. The dew came through later in the night. It started to spin late so we bowled slower to the tailenders. It’s been great. It took us 24 years since the last time we were here, but we feel safe, we’re happy, the crowds are amazing. [On Travis Head] I’m stoked for Travis. He’s been out of the team for a while and to get a 100 off 70 balls, it’s a match-winning knock.”

Toss: Babar won the toss and Pakistan will bat second.

Player of the Match going to Travis Head:

“Nice to get a look at the top, get an opportunity and take it. I felt like we set the platform really well, Finchy and I, so we knew that with the dew coming in it may be tough to bowl later in the innings. So runs at the top against the new ball were going to be crucial and it was nice to play a role. It’s a completely different wicket from a night game, so we played it how we see it. I thought we put on a great total and were able to defend it. It’s nice to [bowl] when needed. It may not be the whole series but when the opportunity arises, I was able to do my job.”

“We let them score too many runs in the first ten overs. We started poorly and then gave away too many runs at the death. While Imam and I were batting, we felt we had the chase under control but then lost wickets in clumps and couldn’t recover.”

“We felt we probably needed around the 300 mark. Having no experience here in the past of what we felt like we needed to set, it was made a little bit easier by Travis Head getting off to a flyer. They bowled well through the middle part and through the back end of the innings which made it difficult for us to get away. We felt as though we needed an extra spinner based on how dry the square looked and how the Test wicket played as well.

There’s not a huge amount of grass out there. We come here with a real open mind to be flexible with the team we select and some different roles that the guys play so I’m really proud of the way that the guys took on that challenge. It’s very wet now. The guys were struggling toward the back end to hold the ball. As Babar said, if you get some in batters, it can be slightly easier. Once you expose a new batter, it can be a bit more difficult. So that’s something we need to learn as well if we bat second, once you get someone in, you need to cash in big.”