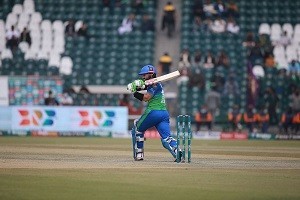 Rossouw: “I didn’t think of much, see the ball hit the ball. We bat deep. I just had fun out there. Didn’t want to run much! Had a bit of luck, that’s important in T20. Happy to score some runs today.”

Multan is now pretty much guaranteed to finish top of the table and Quetta needs to hammer Karachi in their final game while hoping Islamabad loses heavily in their last two. Lahore and Peshawar are officially through to the play-offs. Islamabad United has one foot in the knockout stages but doesn’t have the ‘Q’ next to their name just yet. This was the heaviest defeat in PSL history, beating Multan’s 110-run win against Quetta last season.

Multan Sultans have won the toss and will bat first.