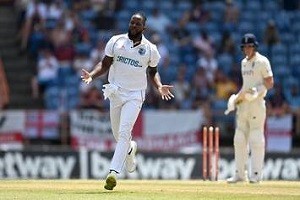 In reply, the West Indies also struggled to score runs, captain of the team Brathwaite out with scoring just 17. Campbell contributed 35 runs, Mayers 28, Joseph 28, and Roach 25. It was the keeper of the home team West Indies who took charge and smashed ten boundaries in his beautiful innings. He scored his century off 257 deliveries and he goes not out. Woakes took three wickets, Overton, Saqib, Stokes took three wickets each. Root dismissed one English batsman. Till stumps day three England lead by 10 runs with just two wickets remaining.

Joe Root: “Immediately it’s the frustration of how it’s finished because throughout this series I think we played some really good cricket. We’ve shown what we’re capable of as a group, we’ve grown over the first two games as a batting group we’ve shown big strides in that department and yesterday has really let us down. Unfortunately, we’re in this position where we’ve ended up losing out on the series when we’ve played so much brilliant cricket.”

On his own future as England Test captain: “I’m very passionate about trying to take this team forward. I will control what I can control. I don’t think it’s ever in your hands completely, is it? But I feel like the group is very much behind me, we’re doing a lot of good things and we just need to turn that into results.”

Toss: West Indies win it and choose to bowl.

Joshua Da Silva is the Player of the Match. Kraigg Brathwaite, Player of the Series and West Indies captain, accepts the Richards-Botham Trophy. He’s clearly happy with the result but he wants more for his team: “It’s easy to be happy with a series win and relax but I don’t think we can relax. The guys have got to stay hungry.”

“We learned a lot from this series, different periods we saw we could do it. Yesterday was really a remarkable day for us, to show the fight, the attitude we had from the get-go, it’s key to carry that forward. Just keep building. We’ve got to continue, we can’t take it for granted.”

Interim coach Paul Collingwood is backing Root: “The one thing you do notice in that dressing room is that team is together, right behind Joe. The leadership doesn’t affect his batting. He’s still desperate to turn things around and desperate to make this team the best they can be.”

On his own future: “I’ve enjoyed these last few weeks and I feel as though there’s been a really good response from the players. Of course, there’s going to be emotion around this game, and disappointment. But in terms of where we want to move to, I wanted to make a difference, I wanted to make a change… and hopefully, from inside the dressing room, there has been a change. If I was to be given the job… then I would certainly take it.”

“I thought the attitude throughout the whole thing has been brilliant, in that respect we’ve definitely made big improvements and that has to continue. There were so many good things to take away from this. Of course, we’ve come here to win and we’ve not and that’s frustrating, that’s disappointing.”