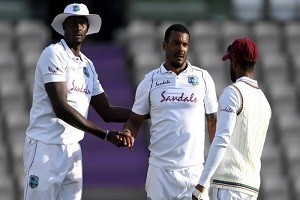 “Pitch looks very dry, cracking quite early with this wind and sun. Root says, Going to be a challenging first session but can see it deteriorating through the game.” Brathwaite once again isn’t getting drawn into talking about England and their problems. “Not looking too far ahead, stick to our plans and the rest will take care of itself”.

Brathwaite says. Permaul is in the WI XI, alongside a four-man seam attack of Kemar Roach, Jayden Searles, Jason Holder, and Alzarri Joseph, with Kyle Mayers and Anderson Phillip sitting out. Brooks, playing his first Test since December 2020, is carded to come in at No. 3.

England win the toss and will bat.