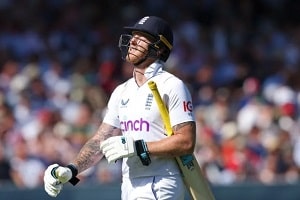 “Not at all [regrets about team selection and batting first]. But first-innings runs are important in Test cricket. Knowing that the wicket might have crumbled, later on, no regret batting first. Being three down at lunch [on day one], I might have been happy with that, might have set it up for our middle order. [On spinners bowling in tandem to Stokes and Foakes] it was actually a bit of a dead period with England not scoring too many.

had already been stretched a little bit by then, but I could have brought them back sooner. A lot of learnings. Cricket is a funny game, lbw shout or DRS going one way and not the other. Our bowlers threw everything at them, can’t take anything away from their effort. From what I’ve heard, [Rassie] has a fracture in his finger. I’m not a medical doctor, but I think he’ll be ruled out of the series, which is highly unfortunate. No doubt [we can bounce back]. It’s set up for a great series, which Test cricket needs.”

England captain, is the player of the match: “It’s been incredible, the support, especially when we have Jimmy bowling from his own end. Amazing to come back from last week’s disappointment at Lord’s. Gives us a lot of confidence back and sets the series up nicely for the last game at The Oval. [On Crawley’s innings] The way he applied himself was incredible, it was definitely a new-ball wicket, and definitely against the reverse-swing of the old ball as well. [The performance] might be forgotten, but it shouldn’t be.

[Ben Foakes] should honestly be the one receiving this award. Seven dismissals as a keeper, and how tidy he was [apart from his hundred]. Amazing game from him, which he should never forget. [On Robinson] Fully deserved the call back into the squad. He’s had some tough times in the last couple of months, and he’s come back and shown the hard work he’s put in over the last six months. Quality player. [Measured batting approach from him]. It wasn’t one of those wickets where you could hit through the line.

Some balls were skidding and some were holding. I’ve always found starting against reverse-swing the toughest. Coming at the ball has made it a little easier for me. It’s not always going to be how we’ve played in the last 5-6 weeks, but having that positive mindset really helps. [On his spell today] I looked at the scoreboard and wanted to see how many overs we had until the new ball. I felt in a good rhythm and the ball was reverse-swinging. I had my tail up and everything felt good.”